Don Frieson is executive vice president of operations for Sam’s Club and is responsible for the operations of more than 600 Sam’s Clubs in the United States and Puerto Rico.

Don joined Sam’s Club in November 2012 as senior vice president for replenishment and planning.  Prior to that, he served in Walmart International as chief integration officer for Massmart Holdings, a chain of more than 300 stores operating in 13 sub-Saharan Africa nations. His responsibilities included supply chain, merchandising, global sourcing and total integration into the Walmart business.

Prior to Massmart, Don was senior vice president for supply chain at Walmart. In this role, Don supported more than 30 Walmart distribution centers that supply merchandise to almost 1,600 Walmart stores, Supercenters and Neighborhood Markets in the Eastern United States and Puerto Rico. Previously, Don was president of Central Division Operations for Walmart Stores supporting more than 600 Walmart Stores and Neighborhood Markets with annual revenues of approximately $40 billion. 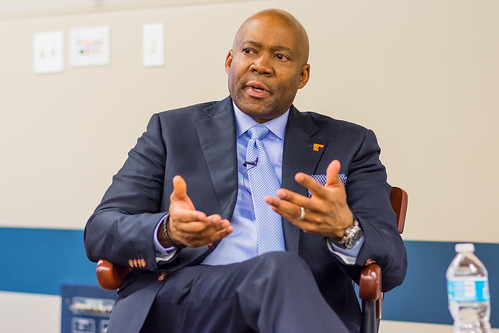 Prior to joining Walmart, Don worked with Schneider National Carriers, where he spent 12 years developing expertise in the trucking industry by working in various positions including service team leader, operations manager and operating center manager.

Don earned a bachelor’s degree in operations management from the University of Tennessee. He also is a graduate of the Global 20/20 Executive Education Program at the Tuck School of Business, Dartmouth College.

Don is a board member of KIPP Delta Academy, The Northwest Arkansas Women’s Shelter and The Amazeum Children’s Museum.  He also serves as an executive sponsor for Dress for Success and is a Life Member of Kappa Alpha Psi Fraternity, Inc.  Don is a former member of the board of regents at Morgan State University.

The Black Cultural Programming Committee (BCPC) and Kappa Alpha Psi Fraternity, Inc. are a proud co-sponsors of this event.

This event is part of the 40th anniversary of the Frieson Black Cultural Center.