With a judicial career spanning 19 years, Justice Cheri Beasley has shaped the jurisprudence of the State of North Carolina and is known as a fair and experienced jurist. Notably Justice Beasley was elected in 2014 in a statewide election to continue service as Associate Justice on the Supreme Court of North Carolina, after having been appointed in December 2012 by North Carolina Governor Beverly Perdue. In the Supreme Court’s nearly 200 years, Justice Beasley is only the second African-American woman and also the seventh woman to serve on the State’s highest court. Prior to this appointment, Justice Beasley served for four years as an Associate Judge on the North Carolina Court of Appeals to which she was elected statewide in 2008. Her election to the Court of Appeals makes her the only African-American woman elected in any statewide election without an initial appointment by the Governor. She served ten years as a District Court Judge in the Twelfth Judicial District, Cumberland County, appointed in 1999 and subsequently elected in 2002 and 2006 presiding in criminal, civil, family, and juvenile courts. From 1994 to 1999, she served as an Assistant Public Defender in the Twelfth Judicial District representing defendants charged with high level felonies.

Justice Beasley’s commitment to serve North Carolina and her residents has extended far beyond the halls of justice.  She has worked tirelessly mentoring students and judges. She lectures on Appellate Advocacy and Trial Advocacy at The University of North Carolina School of Law and North Carolina Central University School of Law. She travels extensively nationwide, as well as to Europe, Egypt, and the Caribbean to promote the rule of law and the administration of justice and the importance of an independent judiciary and fair judicial selection.

Committed to supporting the legal profession, Justice Beasley serves on the American Bar Association Standing Committee on Legal Aid and Indigent Defense (SCLAID) and as vice chair of the North Carolina Equal Access to Justice Commission. She holds memberships in the American Bar Association’s Appellate Judicial Division, Criminal Justice, Litigation and other Sections. In addition, she has served as vice-president to the North Carolina Bar Association and is a host of other professional and civic organizations.

Justice Beasley is the recipient of many awards including the Fayetteville State University Chancellor’s Medallion, inductions into The Douglass Society, the highest honor bestowed by Douglass College-Rutgers University, and the Hall of Fame by the Rutgers University African-American Alumni Alliance. She is the recipient of the Gwyneth B. Davis Award by the North Carolina Association of Women Attorneys and the Women of Justice Public Official Award. Justice Beasley was a Henry Toll Fellow with the Council of State Governments. In March 2018, Justice Beasley will also be awarded the Trailblazer Award by The University of Tennessee Knoxville.

Justice Beasley is a graduate of Douglass College of Rutgers University and a graduate of The University of Tennessee College of Law and completed a summer of law studies at Oxford University. She is currently a student at Duke University School of Law working toward an L.L.M. in Judicial Studies, graduating in May 2018. Justice Beasley and her husband Curtis Owens are the proud parents of twin sons, Thomas and Matthew, age 17, high school seniors.  They are members of First Baptist Church, Raleigh where Justice Beasley serves on the Board of Trustees. 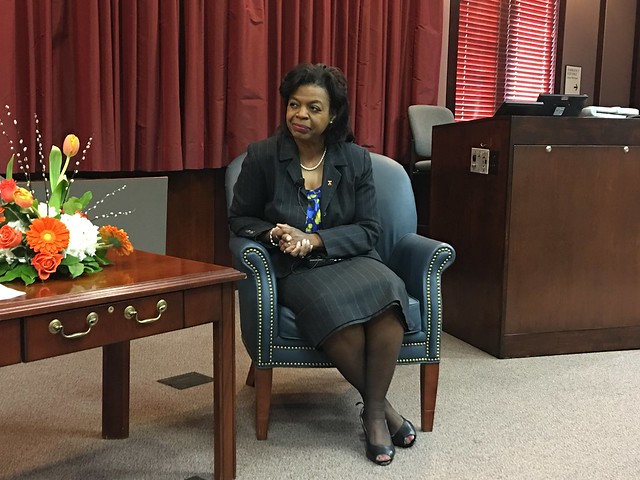