As a member of the pioneering generation of black women historians at the nation’s historically white colleges and universities, Cynthia Griggs Fleming made a career out of making history.

In 1977, Fleming became the first black woman to earn a Ph.D. in history from Duke University. In 1982, she joined UT’s history faculty as one of the first two black women faculty members in the College of Arts and Sciences. Fleming earned tenure in 1987 and spent the next ten years chairing and overseeing the growth of UT’s African-American Studies program. She was promoted to professor in 2005 and, after 32 years of service, retired in 2014. 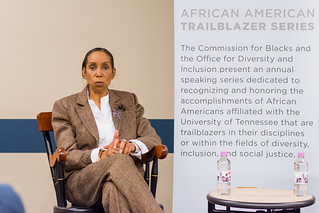 A distinguished historian of the civil rights movement and an oral history specialist, Fleming is the author of Soon We Will Not Cry: The Liberation of Ruby Doris Smith Robinson, which received critical acclaim from both scholars and civil-rights activists. She also co-authored The Chicago Handbook for College Teachers, which has been widely recognized as an important tool for college teachers, selling 10,000 copies in the first six months after its release. In addition, she has published articles on black activism, black educational history, and African-American identity in such journals as The Journal of Negro History, The Tennessee Historical Quarterly, The Journal of Women’s History, and The Irish Journal of American Studies. She also is the founding co-editor of the book series, Civil Rights and the Struggle for Black Equality in the Twentieth Century, at the University Press of Kentucky.

The Black Student Union and the Educational Advancement Program are proud to co-sponsor this event.

This event is part of the 40th anniversary of the Frieson Black Cultural Center.